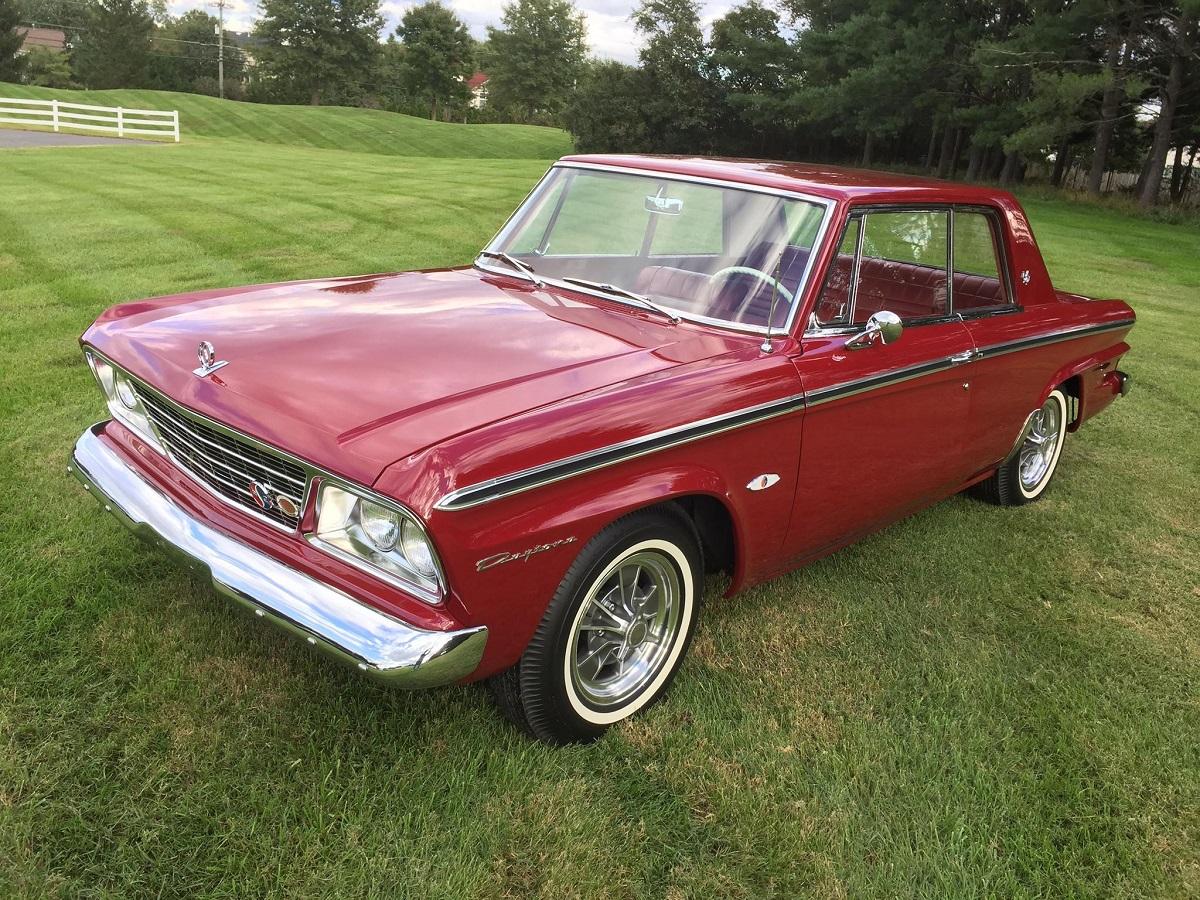 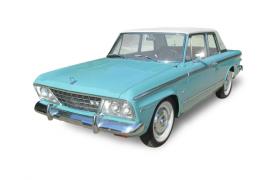 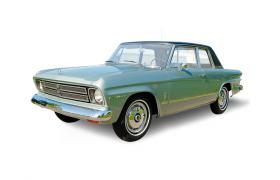 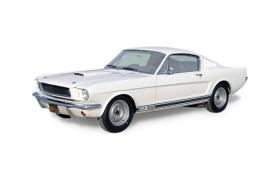 This information guide details the features and specifications of Studebaker’s 1964 Daytona model range, including sedan, wagon, hardtop and convertible. The 1964 Daytona was introduced on 26 September 1963 and shared the Brooks Stevens redesign with the Challenger, Commander and Cruiser models.

Vehicles built in late 1963 were manufactured in the South Bend plant in Indiana, USA. However, financial problems saw a decision to close that plant in early December 1963 after 112 years of operation. The last car to come down the South bend production line was a Bordeaux Red R1 Daytona Hardtop. All Studebaker production thereafter moved to the Hamilton plant in Ontario, Canada. Studebaker’s built after 1 January 1964 are often spoken of as “second series” 1964 models, as a result of certain production changes after the Canadian move.

Studebaker went on to continue the Daytona Range for two more years prior to shuttering its automotive division in 1966. Classic Register has put together two further guides for the 1965 and 1966 Daytona Sports Sedan cars (please see the links to those guides below the quick links.

The information on this page has been mostly extracted from literature, online sources or submitted to us directly by enthusiasts. Each source has been acknowledged in the final section of this guide. Particular acknowledgement goes to the Studebaker Drivers Club forum, and the February 1993 issue of the Studebaker Drivers Club “Turning Wheels” magazine, prepared by Fred K. Fox. That article has made our job much easier that it would have otherwise been.

The Studebaker Daytona range was available in 10 colours from the factory. The paint colour applied to a vehicle was originally noted on a sticker placed on the under-side of the glovebox lid. Most of those original stickers have of course fallen off over time, and the vehicle’s production order may be necessary to confirm the factory paint colour.

Paint colours applied to the 1964 range were known as “Sapphire Luster” exterior finishes. The following colours and codes were available on the Daytona range, with examples of each provided in the gallery:

Daytona convertibles and Wagonaires were only available with full vinyl trim, whilst sedans and hardtops came standard with cloth trim (but could be optioned with vinyl).

The below tables contain the trim codes available on the 1964 Daytona. The relevant codes are specified at item 14 on a vehicle's production order. The code shown next to item 14 will be 3-digits, followed by a two or three letter code.

The first three digits of the code confirm the vehicle's model, colour and the body type, as outlined in Table 1 below.

Tables 2 and 3 provide the specific trim codes that follow the 3-digit code next to item 14 on the vehicle's production order.

Please refer to the images for an example of the trim code as it appears on a vehicle's production order,

In this section of the guide we detail the three standard engine options available in the 1964 Daytona range, including specifications and standard finishes / paint colours applied. For clarity, the "R" type enhanced engines, and engine dress-up kits are covered separately in following section of this guide.

This engine was available on all Canadian built Daytonas, excluding the hardtop. The US therefore only received 6-cylinder Wagonaires, convertibles and Sedans from 1 January 1964, after production had moved to Hamilton, Ontario. All 1964 Daytonas built at South Bend were V8-powered.

This was the base V8 engine package, available accross the Daytona range. The Studebaker 259 engine is identified by an engine number that starts with "V".

This was the optional V8 engine, available accross the Daytona range. The Studebaker 289 engine is identified by an engine number that starts with "P".

- The AC compressor (if optioned) had a standard cast alloy metal finish.

Note, no Daytona was ever factory optioned with the R3 engine.

The only way to confirm a genuine Jet Thrust car through a vehicle's production order from Newman and Altman:

The following additional features were available with the R3 and R4 Super Performance Package:

Three transmission options were available on the 1964 Studebaker Daytona:

This is option code 19 "Flight O Matic". This was available on all three engines (6 cylinder, 259 V8 and 289 V8), and was a 3-speed Borg-Warner automatic transmission with column shift selector. The Heavy Duty Flightomatic had additional cooling lines linked to the radiator for better performance.

This is option code 20 "Automatic floor shift". The "Power Shift" automatic was a floor shift (T-bar) style automatic (as opposed to the Flightomatic column shift), and was a more performance oriented transmission which was only available on V8 vehicles. The power shift was also a 3-speed Borg-Warner unit (the same as the Flightomatic), but the shift quadrant and valve body are different, and reflect the now standard "P R N D 2 1" shift positions. It also has more clutches and a larger heavy duty front drum. The Power Shift can be manually shifted if desired through the gears and also had additional cooling performance, and like the Heavy Duty Flightomatic has cooling lines linked to the car's radiator. Cars ordered with the power shift transmission also had to be optioned with bucket seats (to allow for the shiften position)

This is option code 22 "4 speed floor trans". This was a Borg-Warner T-10 Transmission, and like the "Power shift", the manual was only available on V8 models, but is a relatively scarce option on these cars.

The serial number for a 1964 Studebaker Daytona is stamped into a small metal plate riveted to the left side A-pillar (between the front door hinges).

The serial number starting points below for series 1 and 2 cars applied to all 1964 Lark types (not just the Daytona). It is necessary to refer to the vehicle’s body tag (explained below) or its original production order to confirm whether a vehicle is a Daytona.

The number “8” in the body tag designates the vehicle as a Daytona model.

The “64” was also dropped from the model / body identification tag after 1 January 1964. Therefore, the following body codes applied:

Studebaker employed a new engine numbering system for the 1964 year whereby any engine type built on the same day had the exact same engine number.

1964 Studebaker engine numbers were always stamped into the cast iron engine blocks in the following locations:

The engine number is made up of between 4 and 5 sets of codes. The meaning of each code is summarised below. Note, the fifth code only appeared on engines destined for export.

Attached in the gallery are a images we've found from numerous sources online of original brochures and documentation relating to the Studebaker Daytona. These images are uploaded for infirmational and educational purposes only, and Classic Register Pty Ltd is not the holder of any intellectual property rights.

A vehicle's original options will be noted on its production order next to the relevant code. Below we have summarised the option codes known for the1964 Studebakers. There are several missing: if anyone has further information on these, please send it through to us.