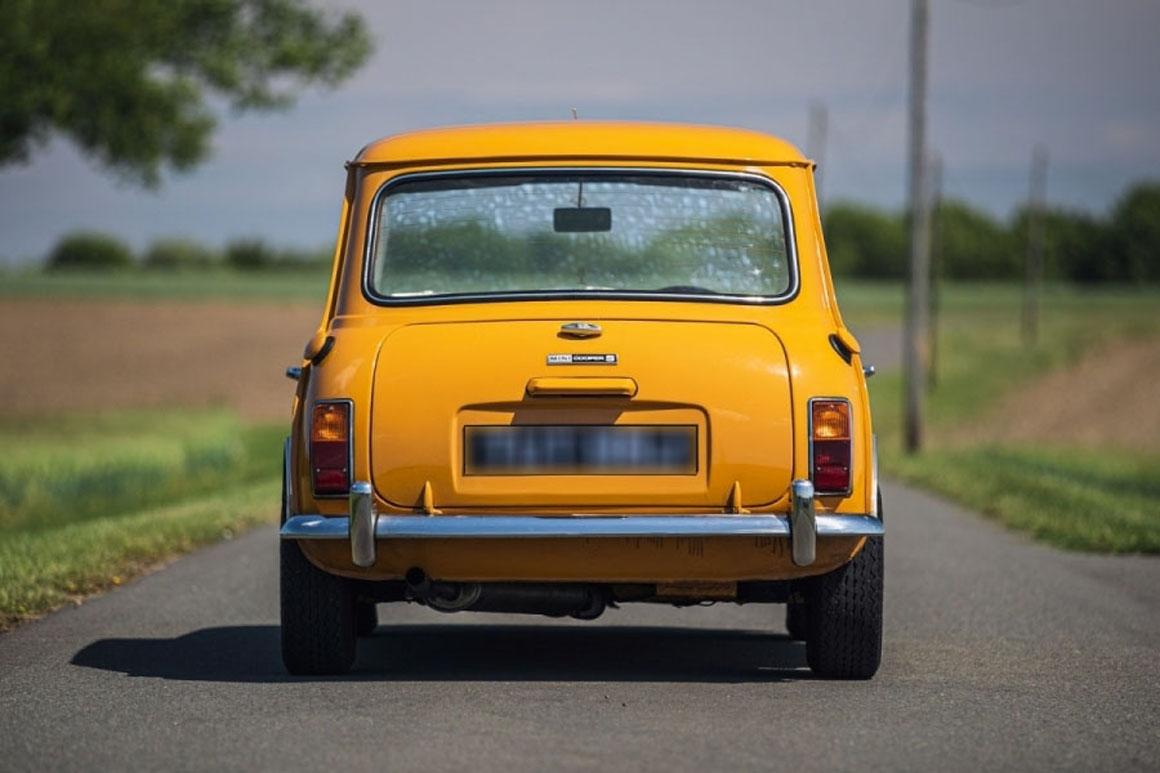 This information guide has been written to share the history, information and specifications of the final iteration of the original Cooper S – the MKIII. Announced in November 1969, the MKIII as its name suggests was a new series in the mini range, introduced a new body which incorporated many changes, but retained the overall shape and appearance of the original classic.

The MKIII Cooper S is a particularly rare variant with just 1,570 units believed to have been built. The MKIII lacked some if the aesthetic differentiating factors that applied to earlier Cooper S variants, and was watered down in appearance so much that it could be easily mistaken for a standard Mini 1000 of the same era without looking closely.

With British Leyland’s rights to use the “Cooper” name ending in mid-1971, the writing was on the wall for one of the most successful sports cars of all time, and the MKIII was the last of the original Cooper S legend. This guide is intended to outline the main features and specifications of this rare and exclusive Cooper S variant. If any readers have further information they think could contribute to this guide, please do get in touch by clicking the ‘contact author’ button at the top of this page.

Production of the MKIII Cooper S commenced in March 1970 and ended in June 1971. Vehicles were built at the Longbridge plant in England, or exported as CKD kits and assembled in overseas markets. At the time, the cost of a new MKIII Cooper S in the UK was £942.00.

1,570 units are believed to have been built. This number is based on limited production records available through the British Motor Industry Heritage Trust.

Unfortunately, it is not possible to date production changes accurately because there are no records of commission numbers for the individual cars. However, there were very few changes made to the MK3 throughout its short production run.

Paintwork: In a significant departure from previous variants, the MKIII Cooper S was only available in monotone paint colours (i.e. no contrasting roof colour). Refer to section 2 of this guide for paint codes, details and examples of the colours available.

Badging: The MKIII Cooper S was not badged as a Morris or Austin in the UK, but simply came under the “Mini” name. In export markets, Austin or Morris badges were applied. On the trunk lid was a simple badge reading “Morris Cooper S”. This was a rectangular badge with “Mini” in black on a silver background, and “Cooper S” in silver on a black background. On the front hood, a shield shaped badge was applied with the word “Mini” on a black background, with two light blue panels below. British Leyland badges were found at the base of each A pillar.

Chrome work / trim: Bumper over-riders were fitted to the front and rear chrome bumpers as standard, but no corner nerf bars were fitted. The MKIII Cooper S shared the same 11-slat chrome grille with the rest of the round front Mini range of 1971 (a change from the 8-slat that applied to the MKII). Plastichrome wheel arch trim was fitted along the side seam. On some cars, the fuel filler caps were painted the body colour. Otherwise, they were chrome plated. These caps were not lockable.

Glass/windows: As standard, a “zone toughened” windscreen was applied, with a laminated windscreen offered in the UK market as an option (this feature may also be found on export models as standard). A heated rear window was an optional extra. The switch and warning lamp was located on a small separate panel under the lower parcel shelf rail. This was a standard feature on export cars to colder climates (such as Canada).

In the below table we set out the paint colours and corresponding interior trim colour availability. This information has been derived from John Parnell’s “Original Mini Cooper and Cooper S” book.

Instrumentation: The central oval instrument binnacle was retained on the MKIII, with the central speedometer showing both Miles & km allowing for metric export markets such as Canada and other parts of Europe. A fuel gauge was below the speedometer in the same binnacle. A temperature gauge was on the left, and an oil pressure gauge on the right (all gauges being of the Smiths brand). Exported MKIIIs may have been fitted with a radio from factory. In the UK market, a radio was a dealer installed accessory.

Seat trim: A new range of vinyl trim colours were introduced including Blue, Black, Brown and Beige. The MKIII trim is almost indistinguishable from the Mini 1000, with vinyl upholstery featuring a simple heat formed pattern (7 long thin pleats running through each of the front seat squabs and backs, and 10 pleats on the rear seat squabs and backs). The seat frame and pads are the same as applied to the MK2, while the covers are almost the same, but the vinyl grain is courser than on the MK2 models. Reclining seats were an option, and some vehicles bound for export markets had a special lock down catch fitted.

Door trim and quarter trim: The door trims are the same as applied to the Mini 1000 and other saloons, with three pairs of lines running the length of the door card, and one single line below. The same pattern was repeated on the rear quarter panel cards.

Trunk: The boot board was covered in course black Veltone fabric (and no longer had a stitched vinyl border as applied to earlier cars). The tool bag in the trunk was the same as on earlier models, nut now contained only the jack and the wheel brace (a plug spanner was no longer supplied).

Carpets and small trims: Carpets were colour coded to match the rest of the trim, as was the rear parcel shelf panel (refer to the paint and trim codes section of this guide). The headliner, sun visors and rear quarter trim pieces were finished in either a pale grey or off-white. The interior roof lamp now fitted on the left side of the roof. The Windscreen pillars, scuttle rail, upper dash rail and lower parcel shelf rail were all trimmed in black vinyl. The parcel shelf rail had a bright chrome finish beading. The Interior mirror has a light grey backing plate, and was fitted with a suction cup to prevent vibration.

Switches: Early UK market cars have a combined ignition lock and starter switch panel (in the centre of the dash), with toggle switches for the lights and wipers (knobs for the heater (Right) and locking choke (left)). Later UK cars (from January 1971) and most export market cars, had rocker switches in the centre dash panel for the lights and wipers, and the ignition moved to the steering column (which had an integrated steering lock). The new ignition on the column was made by “Lowe and Fletcher”. This type of lock was introduced from Commission Number N20D/850. Early export cars with a steering lock have a blanking plug over the redundant ignition hole in the centre switch panel, but the hole was deleted altogether once the steering lock became standard.

Steering wheel, column controls and gear knob: A two-spoke steering wheel was fitted (the same as the MKII), but now had a centre hub stating “MINI”.  A multi functional stalk controlled the indicators, horn, sip switch, high beam flasher. The switches for lights and wipers are still on the main switch panel. The MKIII should have a black gear knob/lever with the gear pattern printed in white.

Seatbelts: Seatbelts in the UK market were dealer installed on pre-1971 cars, but from January 1971 became a legal requirement. Recommended types at the time included “Kangol Magnet” static belts or “Britax” inertia reel belts – both attaching to a centre tunnel buckle fastening.

Heating and ventilation: The MK3 heater is quite different to the MKII. It is a Smiths heater, the same fresh air water valve type – but now the air intake is through the mudguard rather than the bulkhead/firewall. A higher output heater was installed on export cars bound for colder climates. The heater was standard on all UK market cars. An optional extra on the MKIII was a fresh air ventilation system, with black plastic vents fitted to either end of the dashboard liner.

The MK3 Cooper S had a chassis number / car number prefixed by “XAD1”, with a unique car number between 34127 and 458987. The prefix is interpreted as follows:

A = A series engine

The chassis/car number for the MKIII Cooper S appears embossed in a small aluminium tag, noted as “CAR No.” The tag is located on the top edge of the bonnet slam panel, in front of the ignition coil.

“20” indicates the new mini project number for the MK3.

This was then followed by the car’s unique commission number, which was usually supplemented with the letter “A”. “A” indicated that the cars were built at the Austin factory at Longbridge, Birmingham. The second suffix is “B”. indicates the cars were built in Belgium, in Seneffe

Like the chassis number, the Commission number also appears on a small aluminium tag sitting to the left of the chassis number / CAR No. tag, on the top edge of the bonnet slam panel directly in front of the ignition coil. The number is embossed on the tag, and the tag feature a red border.

A MK3 Cooper S body number is prefixed with the code B20D. MK3 bodies still had the FE prefix number on a large steel tag which was welded to the body shell.

The FE numbers can’t be used to identify a mini variant. The car number allocated to the MK3 S is taken from a series of car numbers allocated to all minis at the time that went through the factory. Evidence suggests there were small batches of particular models produced together (eg – 10-20 consecutive numbers at a time).

The MK3 Cooper S had engine prefixes starting with 12H, followed by a code number of either 397 (which meant it was fitted with a C40 Dynamo) or 398 (which meant fitted with a 16ACR Alternator). That prefix is followed by the letter “F” (which indicates twin carburettors), and finally “H” for “High Compression”. However, frequently the letter “H” is missing from the engine tag.

The engine number, like all mini engines, is located on the top front edge of the engine block, just above the alternator. The MK3 Cooper S had the number embossed on a small aluminum tag that’s riveted to the block.

A range of Special Tuning part options remained available including:

The above items are detailed in in tuning book publication C-AKD 5096. See the full publication at the following link: https://mk1-performance-conversions.co.uk/pdf/AKD-5096.pdf

The MKIII Cooper S had limited promotional material produced – we presume partly due to its low production numbers but also perhaps due to the fact the Cooper name was being phased out in the mini range. It’s also likely that the company was focused on promoting newer performance names in the range such as the 1275 GT.

We have managed to find a small sample of original promotional documentation on the MKIII Cooper S, as shown in the images. If any enthusiasts have further information or images related to the MKIII S, please click the “contact author” button at the top of this page.

The following links have been particularly useful in preparing this guide

The following book publications have been relied on in preparing this guide: