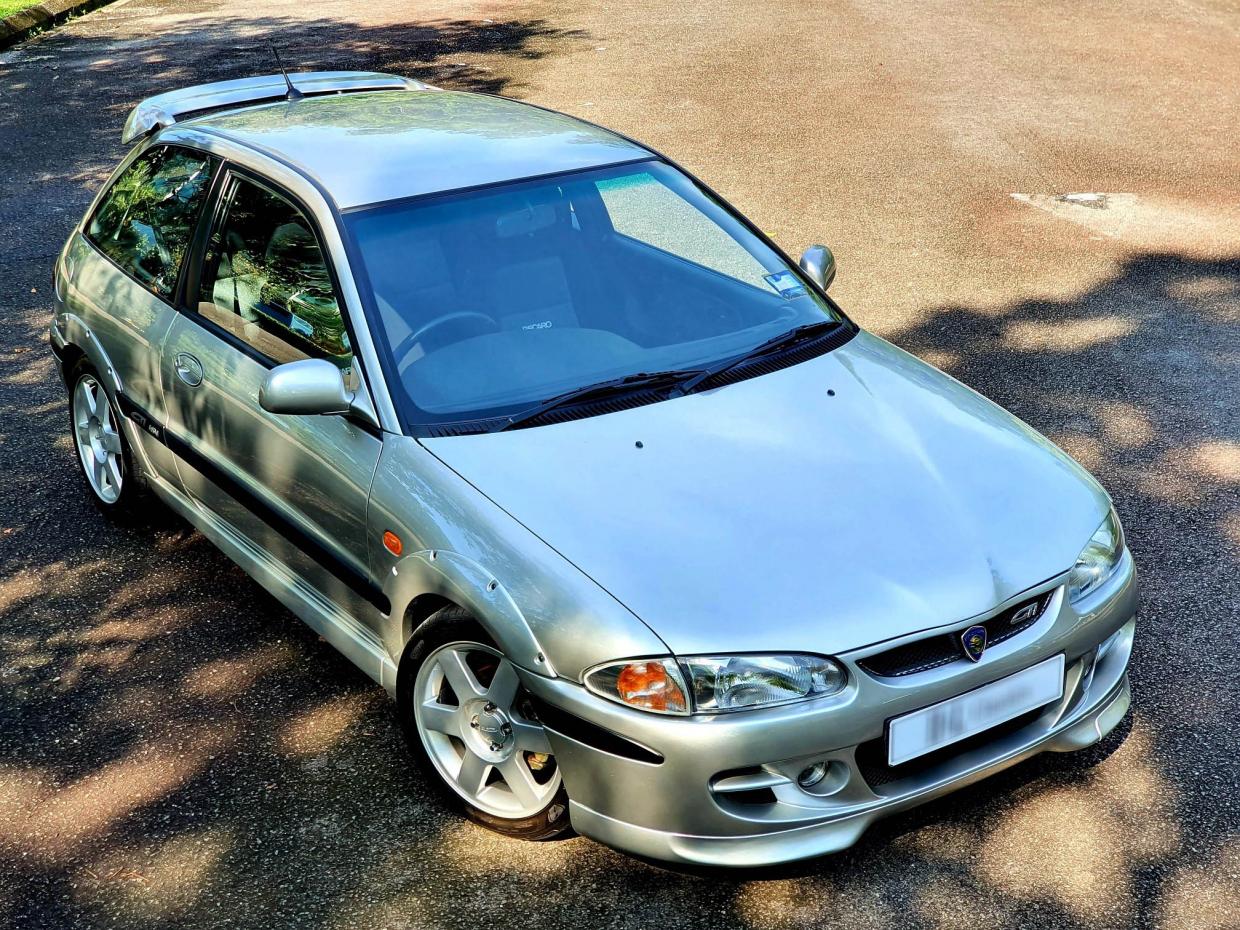 This guide has been written for those seeking information, history and detailed specifications for the Proton Satria GTi (also known as the Proton GTi 180 in some markets). This legendary naturally aspirated hot hatch has developed a big enthusiast following in the small number of markets in which it was sold, so we thought it appropriate to consolidate the information available for the cars for the benefit of enthusiasts.

The Satria GTi (which was based on the fourth generation Mitsubishi Mirage / Colt chassis) was substantially different to its base model counterpart, having been re-engineered by Lotus in the UK, which at the time was owned by Proton. Lotus made numerous aerodynamic and handling improvements to the car, which won over motoring journalists and tuners. Further adding to the car’s desirability was the fact that it featured the 1.8 litre 4G93P engine (a non-turbo higher compression version of that found in the Lancer GSR). This engine matched the car’s performance to its handling, and provided a fantastic base for tuners and weekend racers. Its popularity with tuners and entry level motorsport has unfortunately resulted in many of the cars having hard lives and many have been lost over the years. This is great news for parts availability, but has meant that original complete units are rather thin on the ground: this is part of the motivation for writing this guide.

The Proton GTi’s competitors arguably include the Peugeot 206 GTi, the Nissan Pulsar SSS, the Honda Civic VTiR, the Ford Focus ST, the Ford Fiesta XR4 and the Renault Clio 2.0 16v Sport. The Satria GTi was a special car because it came out of nowhere from the non-mainstream brand Proton, which in the competitive UK and Australian markets was not particularly well known at the time.

The Satria GTi was built from 1998 – 2005, and was first offered as a 1999 model year car. The car was offered in four major RHD markets including Malaysia, Singapore, UK and Australia. A special edition “LE” model was also produced with some additional features (such as leather trim). Only 20 units were delivered to Australia (and an unknown number to other markets). Unfortunately, it wasn’t offered in New Zealand, where we personally think it would have been a hit. It was offered in very limited numbers in some European markets (Germany being one of them), where it was known as the “Proton GTi” or the GTi 318 (and never wore the “Satria” badge).

We have not been able to confirm total production numbers for the Proton Satria GTi. The only record of sales we have seen is confirmation that 160 units were sold in the UK market in the first 6-months after launch. Based on some forum discussion, we make a (guess) that export markets (UK & Australia in particular) would have received around 5,000 GTis in total. Presumably the Malaysian domestic market was much larger, given that there seem to be many GTis available on Malaysian car sale websites at the time of writing this guide. Conversely, looking on sales sites in Australia and the UK, numbers are really dwindling, and most ads are parts only.

On the outside the GTi was one of the most outspoken sports hatches in its class, with a distinct body kit, wheels and a great stance. All GTis were finished in a silver grey paint colour (code AC16930). A sticker confirming the paint code was mounted on the car's bulkhead (an example is shown in the image gallery).

A body kit was designed and fitted by Lotus to achieve better aerodynamics. Features included:

We have sighted several inconsistencies and changes with the GTis badging based on observing cars from different years and in different markets. We note the following badging observed on various cars:

In this section of the guide we detail the mechanical specifications for the Satria GTi. This section includes details of the change to the engine Electronic Control Unit (ECU), which in early cars was a Mitsubishi (MMC ECU), and in later cars was a Siemens ECU. Please note, power specs may differ to those quoted below as a result of the ECU changes. If you have further information / clarity on the power specs, please do get in touch.

One of the most confusing topics we discovered when researching the GTi is the ECU, and the changes that were made throughout production. There appears to be a big preference for the earlier MMC ECU cars, which have more power, higher top speed, and are supposedly more tuneable. Below we have summarised the difference between the ECUs based on our review of forum discussion, which will hopefully assist enthusiasts in understanding why there is so much talk about the ECU changes in the GTi.

The MMC ECU was fitted to early GTis, up to some point in mid- 2001. We have not been able to confirm a precise changeover date, and there is some debate around it.

In 1999 cars, the MMC ECU was adapted to run without a catalytic converter. As a result, these very early non-cat cars are the best performers. For the 2000 model year, the MMC ECU was detuned slightly to meet emission standards for export markets (such as Europe and Australia), and ran with a cat converter and oxygen sensor. We presume that these cat-converter compatible MMC ECUs were the ones that delivered the performance specifications for the GTi that were quoted in most magazines at the time (i.e. 0-100 in 7.8 seconds, and a top speed of >200 km/hr).

These earlier MMC ECUs are often preferred by enthusiasts not only due to the greater factory power output, but also because they are considered simpler to modify by tuners.

The MMC ECU can be tuned with piggyback modifications. It is a simpler ECU which can be manipulated easily in comparison to the Siemens VDO ECU. The MMC ECUs use a mass air flow sensor to read the incoming air charge. Based on the air charge, it determines the injector duty cycle. Therefore, if you plug in higher flow injectors, your engine will run richer all the time. Plug in lower flow injectors, and your engine runs leaner all the time (i.e. the injector cycle is static despite the change). Tuning on this sort of ECU involves only the manipulation of mass air flow output. By altering  the mass air flow signal provided to the ECU, it fools it into using a different injector duty cycle, which can be used to get more from the engine.

This ECU is believed to have been fitted to cars from late 2001, through to the end of GTi production. Again, this is the subject of some debate.

This ECU has received criticism as it reduced the GTi's factory performance specifications (0-100 in 8 seconds or slower, and top speed dropped to about 190km/hr or less). The engine's redline with this ECU also dropped from 7,500 to 6,500rpm.

The Siemens ECU is considered a 'smarter' and more modern ECU in comparison to the MMC ECU. However, that has also resulted in it being more difficult to modify because it does not respond to 'piggyback' modifications like the earlier MMC ECU. This ECU can be modified, but according to forum discussion it is a bit more difficult to do.

Unlike the MMC ECU, the VDO ECU uses the lambda sensor for closed-loop operation at idle and up to around 3,500rpm. Within this closed loop system, the injector duty cycle is based on the air-fuel ratio. So if you want to tune the VDO ECU up to 3,500rpm, you need to intercept the lambda sensor value. From 3,500rpm upward, it uses a MAP sensor that uses manifold vacuum to determine airflow. The VDO ECU goes into an open loop mode similar to older ECUs and you will need to alter the MAP sensor signal to alter performance.

The Siemens VDO ECU has the added advantage of a built-in knock sensor that ties back to the ignition advance mechanism. Therefore, engine knocking due to a lean mixture can be mitigated by the Siemens VDO ECU which will compensate by enriching the fuel mixture.

There are some great comments at the following link where most of the above information was sourced:

The VIN is located on a factory VIN plate, positioned on the central bulkhead, affixed with two rivets. The same VIN also appears stamped into the bulkhead to the left of the VIN plate.

The Satria GTi is fitted with the 4G93P engine. This code, and the unique engine number that follows it, is stamped into the front right of the engine block, directly below the radiator hose connection. The "4G93P" code is also noted on the VIN plate riveted to the central upper bulkhead.

A silver reflective sticker was also affixed to the upper bulkhead with "Proton" printed above the GTi model code "C99" and the engine code "4G93".

The GTi's links to Lotus, and an emphasis on its handling were the main points pushed in the car's advertising campaigns, and we have attached several examples from prominent magazines - particularly Australian magazines from the early 2000s (Wheels Magazine and Motor Magazine). Additions are always welcome - please click "contact author" at the top of this page to get in touch with us if you have further details or other original documentation which you think will benefit this guide.

The GTi was seen as a very young person's car at the time, mainly appealing to late Gen X and Gen Y consumers. The GTi was a very popular tuners car, but somewhat seen as a poor man's sports car. The ultimate demonstration of how the GTi was viewed is probably summed up by its appearances in the Australian TV series "Fat Pizza". Interestingly, both the Malaysian and UK police forces used Proton GTis as token patrol cars. Examples of both cars are shown in the image gallery.

Related to the Satria GTi (but a separate model) was the R3 (R3 derived from "Race, Rally, Research"). This was a special edition model that we thought worth mentioning in this guide, as it is generally viewed by by enthusiasts as a run-out model for the Satria GTi.

There were only 150 of the first Generation R3s built. They utilised the same 1.8l Mitsubishi sourced engine as used in the GTi, but there were significant differences between the cars, which focussed heavily on weight reduction and handling. The following list of features / modifications were applied to the R3 cars (note, this list mainly covers the Stage 1 R3). The R3 also had stage 2 and 3 versions which had more significant upgrades to  the power train and chassis.

A big thanks in this section to the information and images from the following link: http://www.zerotohundred.com/forums/threads/retreat-review-r3-satria.3953/, paultan.org and wapcar.my.

The following links / sources have been used in the drafting of this guide: