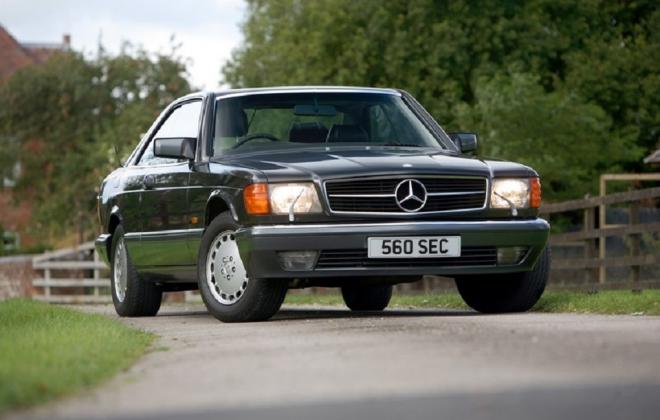 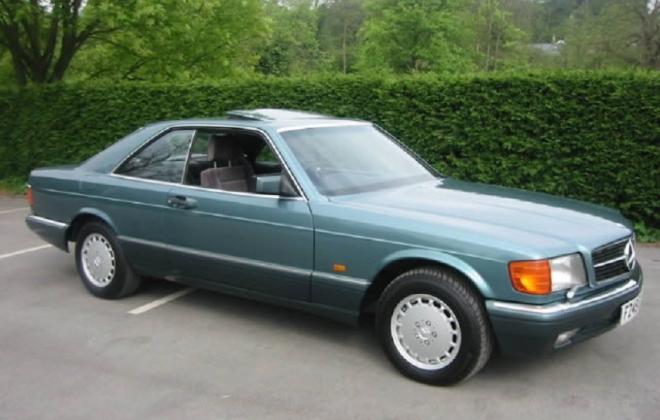 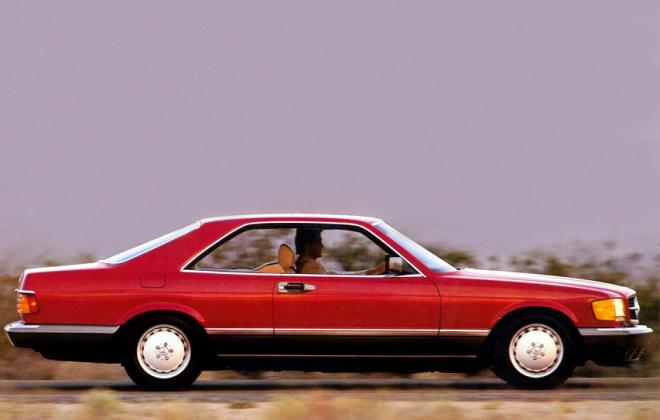 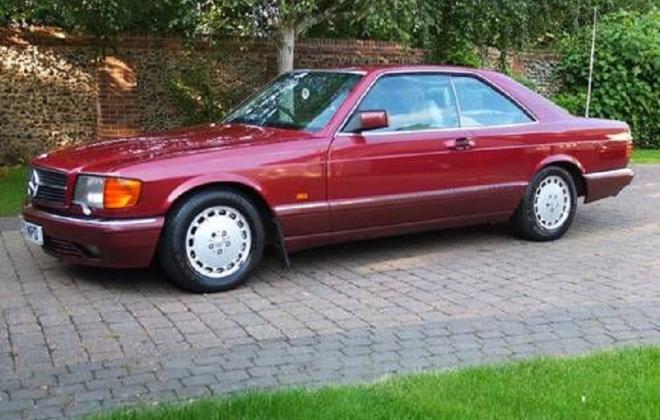 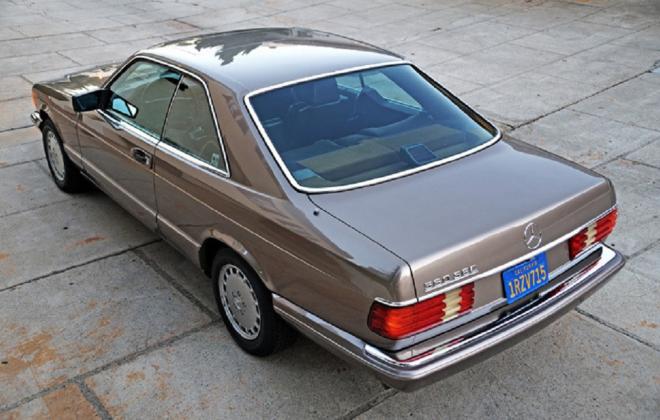 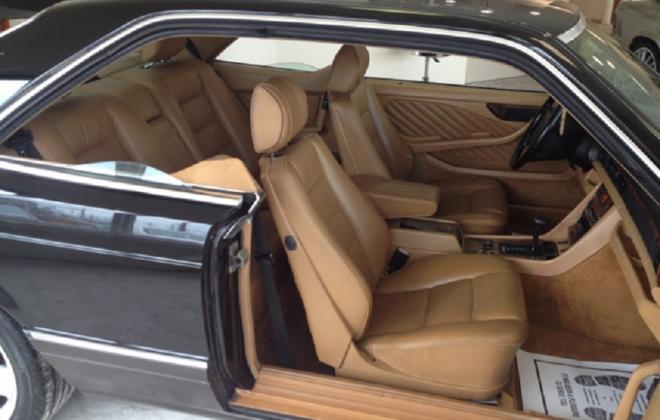 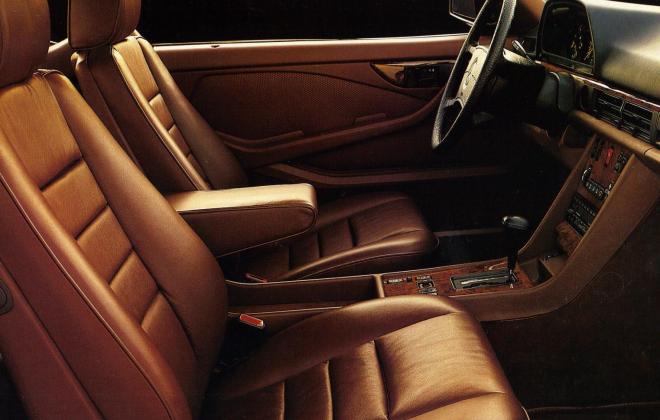 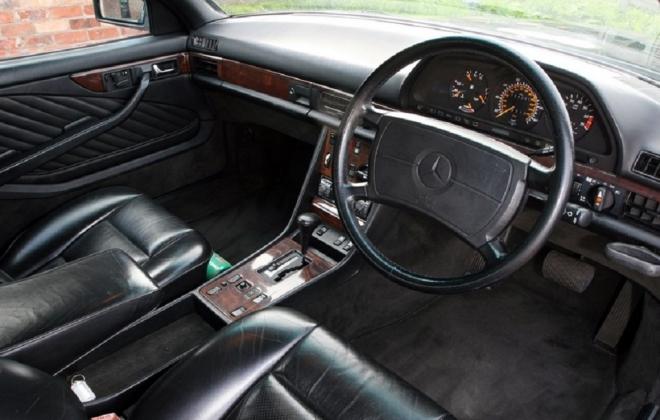 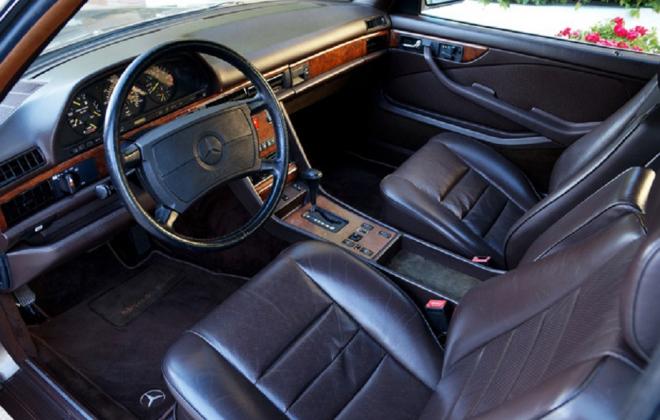 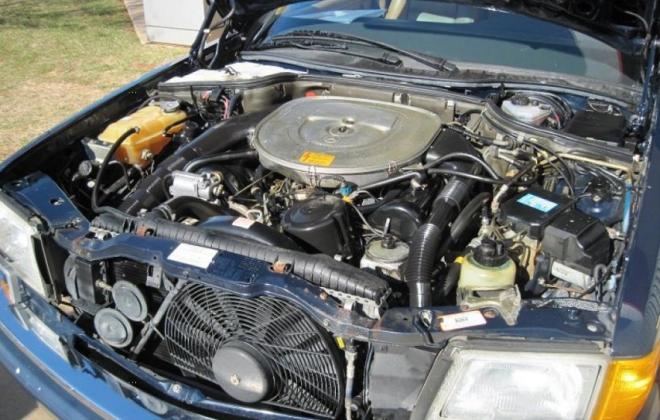 In our previous article, we explained why the Jaguar XJS deserves to be in our top 10 list, and gave further rationale for its location at the back end of the list. In this article, we focus on our number 9 car, the Mercedes Benz 560SEC, and provide the rationale for our choice in a similar format.

The 560SEC, based on the S class W126 chassis, represented the flagship coupe for Mercedes Benz in the 1980s. The SEC series coupes replaced the SLC models of the previous generation, which had been based on the SL class car, and therefore reflected a new direction for the Mercedes Benz top end coupe. The SEC was available with a variety of V8 engines, including a 3.8L, 4.2L, 5.0L and finally from 1986, a 5.6L. For the purposes of our top 10 list, we specifically focus on the 560SEC, as the highest model available within the SEC range, and the most desirable sports coupe produced by Mercedes Benz during one of their best periods.

The 560SEC is available today at a fraction of its original $250,000 USD price tag, and it is a worthy competitor in our top 10 future classic cars list, providing a substantial investment opportunity in the long term. Our rationale for the inclusion of the 560SEC is outlined below.

The factors that contribute to the 560SEC’s inclusion in our list are similar to those which we will run through for the 500E W124 However, one factor is missing which other cars on the list do have. This factor is a successful motorsport history. Unfortunately, the 560SEC lacks such a strong history, or perhaps lacked attempts at achieving success in motorsport. Instead, the 560SEC qualifies in our top 10 based on its aesthetic design, advanced engineering, build quality and performance. These elements are outlined below:

The design of the 560SEC could have been released 10 years after its initial launch, and still have been a success in the showroom with its modern, timeless look. On its conceptual release in 1979, it was hard to believe that such a car would even come into production, with clean and sophisticated lines far more reflective of sports car designs seen from the early 1990s onwards. The appearance of the cars was all the work of Mercedes Benz designer Bruno Sacco, who had created a trademark look for Mercedes cars throughout what was arguably one of Mercedes Benz’s best eras. The SEC coupes still look as amazing today as they did when first released, and are often described by the phrase ‘Italian artistry combined with German quality’. The pillar-less coupe design, frameless windows, clean panel connections, long front end, finished with one of the most proud looking 3 pointed stars of all Benz models ever produced, make the SEC very unique and identifiable among more traditional cars of the time.

The SEC design is one that perfectly sums up the 80s Mercedes Benz coupe, with its aura of quality, sophistication, style and performance. This design will be a lasting legacy from an era which most argue produced the best Mercedes Benz cars, and this factor contributes substantially to the inclusion of the 560SEC in our the top 10 affordable future classic cars list.

The Mercedes Benz cars designed prior to 1992 are well known for being the most over-engineered cars in the world, and are held in high regard by motoring enthusiasts globally. The W126 S class, and in turn the SEC coupe, are no exceptions to this stereotype, and the number of cars still on the road today demonstrate their bulletproof reputation. When you get up close to these cars, open doors, start the engine, and use any features available, you feel a huge sense of quality. Every button, and every latch, responds as if it were brand new, whether or not the car has half a million kilometres on the clock. The quality and durability obsession Mercedes Benz had during this era is extremely admirable, and partly explains the desirability of these cars. When compared to the Jaguar XJS which we wrote about in our last article, the cars may as well be from different planets in terms of quality and reliability.

In addition to the quality of these cars' fit and finish, they also provide very advanced features for their time. Airbags were an option on the S class from 1981, and always an option on the coupe, with dual airbags as an option from 1987. In addition, the 560SEC was available with traction control, pre-tension seatbelts, anti-lock brakes (ABS), crumple zones and safety cells, among many other safety features well advanced for the early 1980s. Mercedes was even conducting its own 60/40 offset crash tests (among many other crash test types) well before this became common practice with national safety regulators decades later. These advanced features operated flawlessly in the cars, particularly considering the technology was so new. Such advanced features, quality and safety meant that the 560SEC was the ultimate vehicle choice in the 1980s, and its combination of technology and style meant it was an absolute sales success.

Although the 560SEC had limited motorsport experience or success, it is important to note that motorsport was not particularly an image that Mercedes seemed to want the SEC to have. Mercedes had plenty of success on the racetrack in the 1980s with other vehicles (including the vehicle discussed in our next article), but the SEC coupes were not on the agenda, other than with a brief attempt at the Spa 24 Hour race in Belgium. This attempt was a great success for the cars early on in the race, until technical failure brought an end to what could have been a longer campaign of the SEC coupe. So, more than a lack of success, it is more a lack of trying by Mercedes Benz that led to the car having limited accolades on the track.

Nonetheless, the 560SEC is an extremely competent performer for a large, heavy coupe. The 560SEC in top spec form produces 220kw, and gets the car from 0 – 100 kph in around 6.8 seconds (or less if you have a look at some of the YouTube videos available). The 560SEC also has a respectable top speed of 250kph. These factors make the 560SEC faster in sprint and top speed than the Jaguar XJS V12, and are another tribute to the car's engineering. Compare these times and speeds to other luxury cars in the same class, and the Mercedes usually comes out on top. This made the car particularly attractive at the time of sale, and further contributes to its desirability as a respectable performance 80s icon today.

The performance of the 560SEC along with its good looks and advanced engineering, warrant its inclusion in any top 10 future classic list, and the fact that it is available at such low prices confirms it deserves to form part of our article series.

There is not much about the car itself that can be criticised, but as we have to provide justification for its position at the latter half of the top 10, we note that there are a few elements that bring it down. These include the cost and complexity of restoration, high production numbers, and as previously noted, the lack of motorsport success.

The cost of parts and accessories for the SEC coupe are not unreasonable. However, it will cost you a lot more to restore one of these than your average American muscle car. Moreover, they are a very advanced technical car, and the complexity of undertaking a restoration on such a car also has to be considered if you want something to tinker with yourself. The 560SEC is very serviceable compared with later Mercedes Benz models, but will require a lot more technical know-how than, say, a Ford Mustang from the 1960s. Having said this, many of the cars on the market do not actually need major restoration work. Due to the cars' excellent build quality, and the fact that they were typically purchased by wealthy people who could afford to service them regularly, they have stood the test of time. Examples can often be seen online with high kilometres, but with no material signs of wear and tear. Like all cars, however, the time will come, and this can have an impact on their desirability.

The production numbers, although not as high as the Jaguar XJS, are quite high for such an expensive car as what the 560SEC was when released. Approximately 75,000 SECs were produced in all variants, with around 30,000 of these in the form of the 560SEC. Although these numbers are extremely minimal when compared to, say, the original Ford Mustang, they are significant enough in the current market to make cars constantly available, and therefore excerpt some downward pressure on the prices demanded.

Finally, the issue of motorsport is a big one when it comes to classic cars. A large majority of the most desirable collector cars in the world have some sort of racing history behind their value, and unfortunately, the significance of this cannot be ignored when it comes to the 560SEC. The car could have been very successful in a variety of events if Mercedes had put its mind and money into it. However, it seems it was not meant to be.

I would like to be able to say that the performance and quality of the car make up for the lack of motorsport success, but there is too much competition in this top 10 space to bring the 560SEC any higher than spot 9. Although the 560SEC seems to have hit its price floor globally, the factors discussed above mean that prices will likely remain stable for a few years to come, before the market recognises the significance of this car.

As a concluding note, if you are looking at purchasing a 560SEC, it is very important to consider the exact specifications of the car, which can have a large impact on its value. Whether the car was factory delivered to your country of purchase is often a big factor, as is whether the car has a Mercedes-Benz service history. Further, upgrade features such as airbags, due to their limited installation on these cars, can make vehicles more desirable, as can the different engine power specifications which were not consistent between different markets. For example, Australia received lower powered 205kw cars, whilst the Hong Kong market received 220kw cars, probably due to pollution laws. All of these factors need to be weighed up, as this can have an impact on the desirability of the car.

I hope you have found this article interesting and informative. Please feel free to comment on the article below (note that you must register with us to comment). Shortly, we will be publishing our article on car number 8 in the top 10 affordable future classic cars of the 80s and 90s, the Mercedes Benz 190E 2.5 16 valve and 2.3 16 valve. To see any of our other articles, click here.